Through formal Senate Resolution SR 155, House Resolution HR 41 and Presidential Proclomation, April 6 was designated as National Tartan Day in the United States. Here are some highlights from these documents:

The significance of April 6: 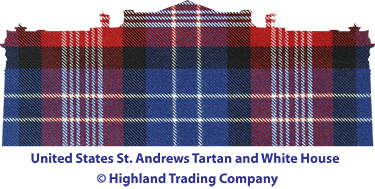 “recognizes the monumental achievements and invaluable contributions made by Scottish Americans that have led to America's preeminence in the fields of science, technology, medicine, government, politics, economics, architecture, literature, media, and visual and performing arts;”

And they go on to mention just a few great Scottish-Americans:

“Some of the great Scottish Americans include Alexander Hamilton, one of the architects of our Constitution and the first Secretary of the Treasury; John Paul Jones, the father of the United States Navy; Andrew Carnegie, one of the most successful businessmen ever, renowned for his charitable activities; Alexander Graham Bell, inventor of the telephone; Buzz Aldrin and Neil Armstrong, who both captured the imaginations of the entire world by floating above it and exploring what no person had ever explored before. In fact, the term `Great Scot' is meant to express oneself in the presence of something extraordinary. I think I speak for all Americans of Scottish heritage and lineage when I say that the Scots brought a spirit of freedom and rugged individualism that found fertile soil in America.”