A Tartan is a colorful pattern of repeating color blocks and stripes, technically called a “Sett”. The Tartan is of 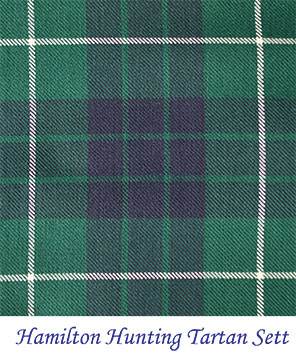 Scottish convention and has been used for hundreds of years as woven wool patterns to make clothing. Traditionally, weaving was a home spun invention (so to speak) and a laborious process when one considers the process of raising sheep, shearing the wool, preparing the wool, coloring the wool, weaving the wool and making the garments. Some of the early garments were rectangular pieces called “Arisaids”, “Tunics” or “Plaids” depending on who was wearing them, and they were sometimes fastened with a belt. “Trews” or pants were also worn, and of course the traditional Kilt. The word “Plaid” used to describe the colorful pattern is certainly rooted in this history. However, there is an important distinction between the words Tartan and Plaid:

All Tartan is Plaid, but not all Plaid is Tartan

The distinction rests with the idea that the Tartan has symbolism, where Plaid does not. In days of old, it is believed that Tartan was first used to describe “Districts” or geographical regions. This then evolved to associating Tartan with family names, or Clans. The Tartan became one way by which one could show their affiliation to a particular Clan. Some family names were referred to as a “Sept”, or a branch of a specific Clan. They did not have their own Clan Tartan, and would wear the Tartan of the Clan to which they were affiliated.

There are literally hundreds of Tartans. There are “Dress” Tartans, which often have red shades. There are also “Hunting” Tartans, often having green shades or more earthy tones. And Tartans maybe further described as “Modern”, “Ancient” or “Weathered”, with the colors being brighter, muted or faded, respectively. And today, there is Tartan to commemorate events, Provinces, States, Countries and more. Anyone can design a Tartan, but to make it official, it must be registered with a body such as the Scottish Tartan Authority. And to clear up a common myth, anyone can wear any Tartan. There are no rules dictating who can wear what. So find a Tartan you like, whether it be a Clan, Country, State, Province or just a colorful pattern you love, and Wear Tartan!